The optical model is a fundamental tool to describe scattering processes in nuclear physics. The basic input is an optical model potential, which describes the refraction and absorption processes more or less schematically.

Of special interest is the form of the absorption potential. With increasing energy of the incident projectile, a derivation of this potential must take into account energy dependent transition from imaginary surface to volume terms.

We discuss the deficiencies of the classical approach and propose an alternative method based on concepts developed within the framework of fractional calculus, which allows to describe a smooth transition from surface to volume absorption in a natural way.

Fractional calculus provides us with a set of axioms and methods to extend the concept of a derivative operator from integer order n to arbitrary order α, where α is a real or complex value.
Despite the fact, that this concept is discussed since the days of Leibniz and since then has occupied the great mathematicians of their times, no other research area has resisted a direct application for centuries. Consequently, Abel’s treatment of the tautochrone problem from 1823 stood for a long time as a singular example for an application of fractional calculus.
Not until the works of Mandelbrot on fractal geometry in the early 1980’s the interest of physicists has been attracted by this subject and caused a first wave of publications on the area of fractional Brownian motion and anomalous diffusion processes. But these works caused only minimal impact on the progress of traditional physics, because the results obtained could also be derived using classical methods.
This situation changed drastically by the progress made in the area of fractional wave equations during the last years. Within this process, new questions in fundamental physics have been raised, which cannot be formulated adequately using traditional methods. Consequently a new research area has emerged, which allows for new insights und intriguing results using new methods and approaches.
The interest in fractional wave equations aroused in the year 2000 with a publication of Raspini. He demonstrated, that a 3-fold factorization of the Klein-Gordon equation leads to a fractional Dirac equation which contains fractional derivative operators of order α =2/3 and furthermore the resulting γ – matrices obey an extended Clifford algebra.
To state this result more precisely: the extension of Dirac’s linearization procedure which determines the correct coupling of a SU(2) symmetric charge to a 3-fold factorization of the d’Alembert-operator leads to a fractional wave equation with an inherent SU(3) symmetry. This symmetry is formally deduced by the factorization procedure. In contrast to this formal derivation a standard Yang-Mills-theory is merely a recipe, how to couple a phenomenologically deduced SU(3) symmetry.
In 2005 we calculated algebraically the Casimir operators and multiplets of the fractional extension of the standard rotation group SO(n). This may be interpreted as a first approach to investigate a fractional generalization of a standard Lie-algebra and the first nontrivial application of fractional calculus in multidimensional euclidean space. The classification scheme derived was used for a successful description of the charmonium spectrum. The derived symmetry has been used to predict the exact masses of Y(4260) and X(4664), which later have been confirmed experimentally.
In 2007 we applied the concept of local gauge invariance to fractional free fields and derived the exact interaction form in first order of the coupling constant. The fractional analogue of the normal Zeeman-effect was calculated and as a first application a mass formula was presented, which gives the masses of the baryon spectrum with an accuracy better than 1%.
It has been demonstrated, that the concept of local gauge invariance determines the exact form of this interaction, which in lowest order coincides with the derived group chain for the fractional rotation group.
Furthermore we investigated the transformation properties of the fractional Schrödinger equation under rotations with the result, that the particles described carry an additional intrinsic mixed rotational- and translational degree of freedom, which we named fractional spin. As a consequence the transformation properties of a fractional Schrödinger equation are closely related to a standard Pauli equation.
Since then the investigation of the fractional rotation group within the framework of fractional group theory has lead to a vast amount of interestening results, e.g. a theoretical foundation of magic numbers in atomic nuclei and metallic clusters
Besides group theoretical methods, the application of fractional derivatives on multi dimensional space  and the increasing importance of numerical approaches are major developments within the last years.
Furthermore, as long as the fractional derivative has been considered as the inverse of a fractional integral, which per se is nonlocal its nonlocality was a common paradigm. But recent years have seen an increasing number of alternative approaches, which are not necessarily founded on nonlocality.
Another increasing  area of research is the investigation of genetic differential equations with variable order fractional derivatives based on an idea of Samko and Ross, where the form and type of a differential operator changes with time or space respectively emphasizing evolutionary aspects of dynamic behavior.
The objective of our research program is the realization of a fractional field theory, which describes the interaction of particles in a more stringent and accurate way, than actual theories do up to now. A major contribution in this research area is the fractional group theory, which allows expressing and solving problems in a very elegant way, which cannot be sufficiently described using traditional methods.
One reason of the success of this concept is the strategy, to interpret concrete experimental data and strictly verify the theoretical results with experimental findings.
Still there are many open questions and problems to solve on the way to realize a successful universal fractional quantum field theory. The concept we follow is a promising strategy, to reach that goal.

Below follows a list of available preprints and reviewed articles. 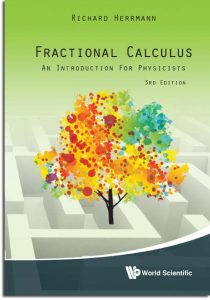 From the cover:
The book presents a concise introduction to the basic methods and strategies in fractional calculus which enables the reader to catch up with the state-of-the-art in this field and to participate and contribute in the development of this exciting research area.
This book is devoted to the application of fractional calculus on physical problems. The fractional concept is applied to subjects in classical mechanics, image processing, folded potentials in cluster physics, infrared spectroscopy, group theory, quantum mechanics, nuclear physics, hadron spectroscopy up to quantum field theory and will surprise the reader with new intriguing insights.
This new, extended edition includes additional chapters about numerical solution of the fractional Schrödinger equation, self-similarity and the geometric interpretation of non-isotropic fractional differential operators. Motivated by the positive response, new exercises with elaborated solutions are added, which significantly support a deeper understanding of the general aspects of the theory.
Besides students as well as researchers in this field, this book will also be useful as a supporting medium for teachers teaching courses devoted to this subject.

” …Richard Herrmann’s third edition of his book is designed to carefully and coherently introduce fractional calculus to physicists, by applying the ideas to two distinct applications: classical problems and multi-particle quantum problems.
… Dr. Herrmann’s book is an excellent introduction to this field of study. ”

A covariant non-local extention if the stationary Schr\”odinger equation is presented and it’s solution in terms of Heisenbergs’s matrix quantum mechanics is proposed. For the special case of the Riesz fractional derivative, the calculation of corresponding matrix elements for the non-local kinetic energy term is performed fully analytically in the harmonic oscillator basis and leads to a new interpretation of non local operators in terms of generalized Glauber states.
As a first application, for the fractional harmonic oscillator the potential energy matrix elements are calculated and the and the corresponding Schr\”odinger equation is diagonalized. For the special case of invariance of the non-local wave equation under Fourier-transforms a new symmetry is deduced, which may be interpreted as an extension of the standard parity-symmetry.

Introducing a set {α_i}∈R of fractional exponential powers of focal distances an extension of symmetric Cassini-coordinates on the plane to the asymmetric case is proposed which leads to a new set of fractional generalized Cassini-coordinate systems. Orthogonality and classical limiting cases are derived. An extension to cylindrically symmetric systems in R³ is investigated. The resulting asymmetric coordinate systems are well suited to solve corresponding two- and three center problems in physics.

abstract:
Reflection symmetric Erdelyi-Kober type fractional integral operators are used to construct fractional quasi-particle generators. The eigenfunctions and eigenvalues of these operators are given analytically.
A set of fractional creation- and annihilation-operators is defined and the properties of the corresponding free Hamiltonian are investigated. Analogue to the classical approach for interacting multi-particle systems the results are interpreted as a fractional quantum model for a description of residual interactions of pairing type.

author:
R. Herrmann
abstract:
The dark silicon problem, which limits the power-growth of future computer generations, is interpreted as a heat energy transport problem when increasing the energy emitting surface area within a given volume. A comparison of two 3D-configuration models, namely a standard slicing and a fractal surface generation within the Menger sponge geometry is presented. It is shown, that for iteration orders n>3 the fractal model shows increasingly better thermal behavior. As a consequence cooling problems may be minimized by using a fractal architecture.
Therefore the Menger sponge geometry is a good example for fractal architectures applicable not only in computer science, but also e.g. in chemistry when building chemical reactors, optimizing catalytic processes or in sensor construction technology building highly effective sensors for toxic gases or water analysis. 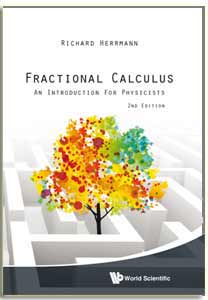 From the cover:
The book presents a concise introduction to the basic methods and strategies in fractional calculus and enables the reader to catch up with the state of the art in this field as well as to participate and contribute in the development of this exciting research area.
The contents are devoted to the application of fractional calculus to physical problems. The fractional concept is applied to subjects in classical mechanics, group theory, quantum mechanics, nuclear physics, hadron spectroscopy and quantum field theory and it will surprise the reader with new intriguing insights.
This new, extended edition now also covers additional chapters about image processing, folded potentials in cluster physics, infrared spectroscopy and local aspects of fractional calculus. A new feature is exercises with elaborated solutions, which significantly supports a deeper understanding of general aspects of the theory. As a result, this book should also be useful as a supporting medium for teachers and courses devoted to this subject.

” …a popular book on fractional calculus, which has proven useful to many new researchers in the field. …A very welcome new feature in the  second edition is the inclusion of exercises at the end of every chapter, with  detailed solutions in the back of the book. This book is specifically aimed at physicists, although many of my colleagues outside physics have also found it useful. …The book takes a practical approach, which will be especially appealing to those accustomed to thinking about modeling in terms of differential equations and transforms.”

” …I was pleasantly surprised not only by the amount of material the author masterly presents, but also by the timely inclusion of historical remarks that frame the discussions within aspects that the reader is familiar with…
Richard Herrmann’s Fractional Calculus is a highly recommended book…

J. Rogel-Salazar, School of Physics, Astronomy and Mathematics,
University of Hertfordshire,
For full details on this review:  Contemporary Physics,  (2015) 56(2) 240
.

“… A valuable addition to the second edition is the exercises-solutions section. … The significant change in size between the two editions within a short period indicates the importance of fractional calculus. … The reviewer strongly recommends this book for beginners as well as specialists in the fields of physics, mathematics and complex adaptive systems.”