Fractional calculus provides us with a set of axioms and methods to extend the concept of a derivative operator from integer order n to arbitrary order α, where α is a real or complex value.
Despite the fact, that this concept is discussed since the days of Leibniz and since then has occupied the great mathematicians of their times, no other research area has resisted a direct application for centuries. Consequently, Abel’s treatment of the tautochrone problem from 1823 stood for a long time as a singular example for an application of fractional calculus.
Not until the works of Mandelbrot on fractal geometry in the early 1980’s the interest of physicists has been attracted by this subject and caused a first wave of publications on the area of fractional Brownian motion and anomalous diffusion processes. But these works caused only minimal impact on the progress of traditional physics, because the results obtained could also be derived using classical methods.
This situation changed drastically by the progress made in the area of fractional wave equations during the last years. Within this process, new questions in fundamental physics have been raised, which cannot be formulated adequately using traditional methods. Consequently a new research area has emerged, which allows for new insights und intriguing results using new methods and approaches.
The interest in fractional wave equations aroused in the year 2000 with a publication of Raspini. He demonstrated, that a 3-fold factorization of the Klein-Gordon equation leads to a fractional Dirac equation which contains fractional derivative operators of order α =2/3 and furthermore the resulting γ – matrices obey an extended Clifford algebra.
To state this result more precisely: the extension of Dirac’s linearization procedure which determines the correct coupling of a SU(2) symmetric charge to a 3-fold factorization of the d’Alembert-operator leads to a fractional wave equation with an inherent SU(3) symmetry. This symmetry is formally deduced by the factorization procedure. In contrast to this formal derivation a standard Yang-Mills-theory is merely a recipe, how to couple a phenomenologically deduced SU(3) symmetry.
In 2005 we calculated algebraically the Casimir operators and multiplets of the fractional extension of the standard rotation group SO(n). This may be interpreted as a first approach to investigate a fractional generalization of a standard Lie-algebra and the first nontrivial application of fractional calculus in multidimensional euclidean space. The classification scheme derived was used for a successful description of the charmonium spectrum. The derived symmetry has been used to predict the exact masses of Y(4260) and X(4664), which later have been confirmed experimentally.
In 2007 we applied the concept of local gauge invariance to fractional free fields and derived the exact interaction form in first order of the coupling constant. The fractional analogue of the normal Zeeman-effect was calculated and as a first application a mass formula was presented, which gives the masses of the baryon spectrum with an accuracy better than 1%.
It has been demonstrated, that the concept of local gauge invariance determines the exact form of this interaction, which in lowest order coincides with the derived group chain for the fractional rotation group.
Furthermore we investigated the transformation properties of the fractional Schrödinger equation under rotations with the result, that the particles described carry an additional intrinsic mixed rotational- and translational degree of freedom, which we named fractional spin. As a consequence the transformation properties of a fractional Schrödinger equation are closely related to a standard Pauli equation.
Since then the investigation of the fractional rotation group within the framework of fractional group theory has lead to a vast amount of interestening results, e.g. a theoretical foundation of magic numbers in atomic nuclei and metallic clusters
Besides group theoretical methods, the application of fractional derivatives on multi dimensional space  and the increasing importance of numerical approaches are major developments within the last years.
Furthermore, as long as the fractional derivative has been considered as the inverse of a fractional integral, which per se is nonlocal its nonlocality was a common paradigm. But recent years have seen an increasing number of alternative approaches, which are not necessarily founded on nonlocality.
Another increasing  area of research is the investigation of genetic differential equations with variable order fractional derivatives based on an idea of Samko and Ross, where the form and type of a differential operator changes with time or space respectively emphasizing evolutionary aspects of dynamic behavior.
The objective of our research program is the realization of a fractional field theory, which describes the interaction of particles in a more stringent and accurate way, than actual theories do up to now. A major contribution in this research area is the fractional group theory, which allows expressing and solving problems in a very elegant way, which cannot be sufficiently described using traditional methods.
One reason of the success of this concept is the strategy, to interpret concrete experimental data and strictly verify the theoretical results with experimental findings.
Still there are many open questions and problems to solve on the way to realize a successful universal fractional quantum field theory. The concept we follow is a promising strategy, to reach that goal.

Below follows a list of available preprints and reviewed articles. 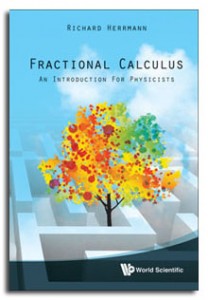 From the cover:
Fractional calculus is undergoing rapid and ongoing development. We can already recognize, that within its framework new concepts and strategies emerge, which lead to new challenging insights and surprising correlations between different branches of physics.

This book is an invitation both to the interested student and the professional researcher. It presents a thorough introduction to the basics of fractional calculus and guides the reader directly to the current state-of-the-art physical interpretation. It is also devoted to the application of fractional calculus on physical problems, in the subjects of classical mechanics, friction, damping, oscillations, group theory, quantum mechanics, nuclear physics, and hadron spectroscopy up to quantum field theory.

“The book is a solid introduction to fractional calculus that contains, in particular an elucidating section on geometric interpretation of fractional operators… the bulk of the book concentrates on aspects of fractional calculus related to symmetries in quantum mechanics…what is covered is presented in an authoritative, solid style and actually provides very entertaining reading…Overall, Fractional Calculus is an affordable and valuable introduction to the field that will appeal to physicists interested in scientific what-ifs…”

“The book has the property that derived results are directly compared with experimental findings. As a consequence, the reader is guided and encouraged to apply the fractional calculus approach in her/his research area. The reviewer strongly recommends this book for beginners as well as specialists in the fields of physics, mathematics and complex adaptive systems.”

“…the first three chapters actually appear very helpful at the graduate level. Each chapter has a careful precis at the start. There are many analyses illustrating outcomes of fractional analyses…If this [fractional calculus] is the field of your research then this book is essential with numerous references…”

abstract:
Based on the Riemann- and Caputo definition of the fractional derivative we tabulate the lowest n=31 energy levels and generated graphs of the occupation probability of the fractional quantum mechanical harmonic oscillator with a precision of 32 digits for 0.50 < \alpha < 2.00, which corresponds to the transition from U(1) to SO(3).

abstract:
Based on the Riesz definition of the fractional derivative  the fractional Schroedinger equation with an infinite well potential is investigated. First it is shown analytically, that the solutions of the free fractional Schroedinger equation are not eigenfunctions, but good approximations for large k and for $\alpha \approx 2$. The first lowest eigenfunctions are then calculated numerically and an approximate analytic  formula for the level spectrum is derived.

abstract:
For the Riemannian space, built from the collective coordinates used within nuclear models, an additional interaction with the metric is investigated, using the collective equivalent to Einstein’s curvature scalar. The coupling strength is determined using a fit with the AME2003 ground state masses. An extended finite-range droplet model including curvature is introduced, which generates significant improvements for light nuclei and nuclei in the trans-fermium region.

abstract:
The eigenvalue spectrum of the fractional quantum harmonic oscillator is calculated numerically  solving the fractional Schr\”odinger equation based on the Riemann- and Caputo definition of a fractional derivative. The fractional approach allows a smooth transition between vibrational and rotational type spectra, which is shown to be an appropriate tool to analyze IR spectra of diatomic molecules.

abstract:
Extending the Liouville-Caputo definition of a fractional derivative to a nonlocal covariant generalization of arbitrary bound operators acting on multidimensional Riemannian spaces an appropriate approach for the 3D-shape recovery of aperture afflicted 2D slide sequences is proposed. We demonstrate, that the step from a local to a nonlocal algorithm yields an order of magnitude in accuracy and the use of the specific fractional approach an additional factor 2 in accuracy of the derived results.